Jesus Christ stressed the importance of Isaiah’s writings when He appeared in the Americas after His resurrection. As recorded in 3 Nephi, the Savior said: “A commandment I give unto you, that ye ought to search these things . . . for great are the words of Isaiah.” In this interview, Ann Madsen explains how Isaiah has helped her become a better disciple, and discusses his teachings about Jehovah and the temple.

How can we find the Savior in the Old Testament?

That’s a great question. Many people don’t enjoy reading the Old Testament or realize that the Savior is there. Sometimes they’ll say, “Oh, I love the New Testament.”

And yet the God of the Old Testament is Jehovah. And Jehovah became the Messiah, who was—and is—anxiously awaited. This promised Messiah was Jesus Christ.

That means when you see people like Moses and Abraham having relationships with the God of the Old Testament, it’s Jesus. They’re having a relationship with the Savior at a different period of His eternal life.

What does “Jehovah” mean?

The translation of Jehovah reads, “I am that I am.” But there are other possible translations of the name, Jehovah. So, you could say, “I will become what/who I will become.”

David Noel Freedman taught me that. (At the time, he was not only a friend, but also one of the best Hebraists in the world).

I don’t want to be too common talking about our relationship with God. It is a sacred, private encounter.

Members of the Church of Jesus Christ Latter-day Saints are one of the only religious groups that don’t think it’s blasphemous to say that we can become like God. But most people don’t know what we mean. Some think we mean that when we die we can be a God. No, that’s not what we mean. But we can have acquired some of his attributes by the time we meet Him again.

Why does Ann Madsen love Isaiah?

I love Isaiah because he teaches of Christ—and because he was so devoted to Christ.

One time, I gave my students an assignment. I asked them to write down all the attributes of Isaiah. They couldn’t talk to their classmates or consult commentaries. I wanted them to identify attributes from their own engagement with Isaiah’s words. And then I’d have them write a paper on who Isaiah was. No commentaries. No one else’s articles. No citations of any kind except for the words of Isaiah and their own insights.

It’s the last paper they write, so it makes them review all that they’ve learned. And then I asked them to title the final portion of the paper, “My favorite message from Isaiah.”

It sounds like an easy thing. But by the time you’re at the end of Isaiah, it’s not. They’ve got a lot of favorite messages. 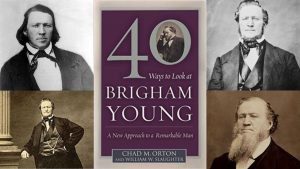 What are Ann Madsen’s favorite messages from Isaiah?

I have a lot of favorite messages from Isaiah:

“You will hear a voice”

Oh, isn’t that a great way to describe the Holy Ghost? Sometimes in my prayers, I tell Heavenly Father that I need to hear a voice behind me saying, “This is the way. Walk ye in it.” I need to know what way I need to walk in about this or that thing.

I also love it when Isaiah says, “Though your sins be as scarlet, they shall be white as snow” (Isaiah 1:18). And they have snow in Jerusalem, so he knew what snow looked like.

There’s a funny story that Truman and I experienced in Jerusalem. We got snowed into our apartment with 18 inches of snow and couldn’t get to the BYU Jerusalem Center because nobody had a snow shovel. Pretty soon, we heard this heavy noise. It was a tank driving through the streets with some kind of attachment that turned it into a makeshift snowplow.

I love Isaiah for his many attributes described in the scriptures:

The list just goes on and on. Isaiah is a really good representative as a prophet of God.

And most prophets, that’s who they are. They’re the ones to whom God speaks in first person: “I the Lord am not well pleased” (which he says most often to most prophets).

The prophets group around times when the people are about to be destroyed. It’s like God is giving them one last chance to repent and be done with it. And then they don’t.

How many authors wrote the Book of Isaiah?

Modern scholars say that chapters 40 to 66 are Second Isaiah. But I’m positive there’s only one Isaiah. Jesus quotes from both halves of the book. The Dead Sea Scrolls don’t have any notation indicating that this is a stopping place. All of the evidence really says that there’s one Isaiah.

But when you’re an Isaiah scholar, there’s no continuing revelation like the Book of Mormon, Pearl of Great Price, and the temple. We have a lot of help as Latter-day Saints.

How has the temple influenced Ann Madsen’s life?

When I first went to the temple in 1952, I went every week for one year. I decided to memorize the endowment ceremony because it’s simple. It’s a story. And when covenants come in, you can plug them into that part of the story.

I had no idea how much memorizing the endowment was going to help me. Truman and I moved to Boston for four years when there wasn’t a temple there. We used to lie in bed at night and review the temple. We wouldn’t say it out loud, but we’d each be there walking through it in our minds because we were far away from the temple.

Now, at nearly 90, with hundreds of temples and more announced each General Conference, I have memorized decades of feelings I have experienced in Temples all over the world, from Samoa to Rome. It is indeed “The House of the Lord” where I feel welcomed.

I understand what Paul proclaimed:

Know ye not that ye are the temple of God?

Why is “HOLINESS TO THE LORD” written on the temple?

I think because “HOLINESS TO THE LORD” tells you what the curriculum is inside that building. You’re going to learn how to be holy and how to be like God, and how to be invited into the Celestial Kingdom. It’s profound symbolism.

Did you enjoy this interview?

Subscribe to our free email list. We specialize in telling the stories of faithful Latter-day Saints like Henry B. Eyring, Gerald Lund, and Bruce R. McConkie.

Ann Madsen is an Adjunct Instructor in the Religious Education department at Brigham Young University. She holds an MA degree in Ancient Studies from BYU with a minor in Hebrew, and has taught university courses on Isaiah for more than 40 years. Madsen contributed to Old Testament Sunday School curriculum for the Church of Jesus Christ of Latter-day Saints, and taught classes on the Bible during two stays at the BYU Jerusalem Center for Near Eastern Studies. She is the wife of Truman G. Madsen.