Who is Matthew L. Harris?

I grew up in central Maine in the 1980s during Ezra Taft Benson’s church presidency.  Early on, before our fledging branch grew to become a ward, we met in an old Masonic Hall over a pizza shop.  It was quite difficult to fast as a young boy when we could all smell the sweet aroma of pizza wafting in the air.  On one Sabbath day during fast Sunday, one of my Sunday School classmates decided to sneak down and buy a pizza.  I was tempted to join him, but I was a pretty good straight arrow so I demurred.  Plus, my father would have scolded me!

I served a church mission to Idaho from 1989-1991.  One of my mission presidents was next-door neighbor’s with Ezra Taft Benson in Midway, Utah, so we heard a lot of stories about President Benson.

Following my mission, I earned BA and MA degrees in history from BYU.  I was in graduate school when I first became acquainted with Dialogue and Sunstone—two seminal publications that would deepen my study of LDS church history.  Following BYU, I earned MPhil and PhD degrees in history at Syracuse University. My major focus in graduate school was early American history.  Later in my career I turned to Mormon history where I’ve been ever since. 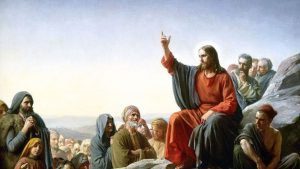 Trending
Grace vs. Works: Has the Pendulum Swung Too Far?

What is the backstory of The LDS Gospel Topics Series: A Scholarly Engagement?

I was in the middle of researching a book called The Mormon Church and Blacks: A Documentary History (2015) when the church released “The Race and Priesthood” Essay.  This important document denounced the Church’s former race teachings, which I decided I needed to include in the book.

It seemed like a logical way to end the book, because it was the first time the Church had come to grips with its teachings that blacks were cursed and/or less valiant.

What was the catalyst for the Gospel Topics essays?

Following the publication of the “Race and Priesthood” Essay, I noticed that the church produced additional Essays.  After reading them carefully, I was struck by what the writers included in the Essays and what they excluded.

It struck me that the Essays would be a useful medium to explore important themes in Church history in more detail.

In that context, I asked my good friend Newell Bringhurst to join me in editing a collection of essays exploring the strengths and weaknesses of the Gospel Topics Essays.  We wanted them to be a launching point for further discussion into complex areas of Latter-day Saint church history.

We also wanted the anthology to include a wide array of voices. We assembled an all-star cast of scholars from the Latter-day Saint tradition, Community of Christ, Evangelical, and Catholic.  Each scholar brought different skills and perspectives to bear as they evaluated the Gospel Topics Essays.

Why was there hesitancy to publish the essays?

The Brethren didn’t want to create a faith crisis for members.  The Essays acknowledge thorny aspects of church doctrine and practice that previous general authorities had either downplayed or ignored, so the Brethren had to be very careful about how they discussed plural marriage, race and priesthood, the Book of Mormon translation, etc.  They didn’t want the Essays to do more harm than good.

What type of vetting process did the essays go through? Who reviewed them?

Elder Boyd K. Packer commissioned the Essays. Latter-day Saint scholars wrote the initial drafts, then church historians reviewed them, then it went up the chain to General Authorities, who vetted them for tone, content, and message.

All of the Essays were signed off by the First Presidency and the Quorum of the Twelve. The Essays were truly a collaborative project of many hands and many sharp pencils.

How important does President M. Russell Ballard say the essays should be?

A couple years after the Essays were released Elder Ballard gave a fireside address to college-aged Latter-day Saints in which he counseled them to know the Essays like the back of their hands.  He also told CES instructors to learn the material so that they could inform their students about them, especially when they had difficult questions about church history and doctrine.

In effect, the Essays would be a resource for church leaders to help answer these questions.

It used to be that when church leaders were asked difficult “gospel questions” by Latter-day Saints, they counselled them to have faith and not worry about it.  But that strategy hasn’t worked very well in the age of the internet, so the Brethren recognized that the Church had to do a better job addressing members’ concerns.

This is why Elder Ballard counseled CES instructors and students to become conversant with the Essays.  They were supposed to be a bulwark against disaffection. The Brethren hoped that the Essays would provide irrefutable proof that the Church wasn’t hiding its history.

Why haven’t the essays been more-heavily marketed?

The Brethren didn’t want to advertise the Essays in General Conference or the Ensign because they feared that if the Essays had a wide circulation it might cause a faith crisis for some Latter-day Saints who weren’t familiar with the content of the Essays.

In other words, the Church’s attempt to be more transparent could cause harm to some Latter-day Saints who were unaware or unfamiliar with challenging hot spots in the Church’s history.

A quick glance at Latter-day Saint blog sites demonstrates that the Brethren had cause for concern. Several essays in my book documents how rank-and-file members reacted to the Essays—some positive, some negative.

What can we infer from the use of the essays as sources in the Saints series?

Within the first year or so of the publication of the Gospel Topics Essays, few Latter-day Saints knew about them. This was a problem because when Latter-day Saints began teaching from them in Sunday School classes, some local leaders rebuked them for teaching from “unauthorized sources.” The Salt Lake Tribune published a story about a brother in Hawaii who was released from his youth Sunday School calling because he used the “Race and Priesthood” Essay as a supplement to his lesson.  His bishop had never heard of the Essays and thus believed that he was teaching from unauthorized sources.

With stories like that circulating, the Brethren realized that the Essays needed to be promoted within the church.  Thus, they decided to incorporate the Essays into church manuals, the CES curriculum, and the Saints’ series.

As the Church becomes increasingly transparent about its history, do you foresee a conflict with those who are uncomfortable with historical criticism?

No, I don’t.  If Latter-day Saints are taught from a young age that Joseph Smith used a hat and a seer stone to translate the Book of Mormon, it won’t faze them when they encounter this notion on the internet.  Likewise, if they learn details about polygamy or plural marriage at a young age, it won’t affect them when they encounter stories about Joseph Smith or Brigham Young’s teachings on this challenging doctrine.

The Brethren have come to the conclusion that if they can “inoculate” Latter-day Saints early, it will lessen the probability of a faith crisis when they encounter challenging material on the internet during a later stage of life.

What do you see as the greatest strengths of the Gospel Topics essays—and what topics would you like to see added to the library?

The greatest strengths are the Church’s willingness to acknowledge thorny episodes in its past.  This is commendable.  Let me provide one example.  In the “Race and Priesthood” Essay, the church repudiates its past teachings about the “curse of Cain” and “less valiancy” assertions.  It also condemns the notion that interracial marriage is disfavored of God.  Most important, this seminal Essay provides Latter-day Saints with an authoritative document to turn to when a fellow member appeals to one of the church’s earlier race teachings to make a point in Priesthood or Relief Society.  This Essay makes it clear that such teachings are no longer acceptable in the Church.  That’s very important.

I would love to see the Church grapple with issues of gender and sexuality and also provide a more in-depth discussion of how Masonry influenced the Brethren’s understanding of the cosmos, scripture, and afterlife.  Clearly, Masonry gripped the early church leaders at Nauvoo, for Joseph Smith’s last words derived from a Masonic distress symbol.  Of all the things he could have said, he appealed to something that was comfortable and familiar to him.  It seems to me that the church could benefit from a deeper examination of Masonry on early Mormon thought and practice.