Dorie Clark is a marketing and strategy consultant and frequent contributor to the HarvardBusiness Review, Entrepreneur and Forbes. She is the author of  “Reinventing You: Define Your Brand, Imagine Your Future,” and “Entrepreneurial You: Monetize Your Expertise, Create Multiple Income Streams, and Thrive.”

Welcome! Before we begin, would you tell us a little bit about yourself and your latest book?

I’m a consultant, executive coach, and author. My most recent book is Entrepreneurial You (Harvard Business Review Press, 2017), and I work with professionals to help them build a reputation inside their companies and beyond as top leaders in their field.

Your career path hasn’t always been clear cut. Was there ever a time when you had to reinvent yourself?

I was laid off from my first job as a political reporter – on Monday, September 10, 2001. I couldn’t find another job in the news industry, so I reinvented myself into a career as a spokesperson on political campaigns. When all my candidates kept losing, I shifted into running a nonprofit, and eventually started my own business. So there have been many reinventions!

How did you determine there was a need for “Reinventing You” and how did you approach the publisher to get it off the ground?

“Reinventing You” started as a blog post that I wrote for the Harvard Business Review. When it was well received, they asked me if I’d consider expanding it into a longer article for the magazine. When the magazine piece came out, it tapped into a current of people longing to figure out how to reinvent themselves. I was approached by three literary agents that week asking if I’d consider turning it into a book proposal. The proposal sold to HBR and it was released in 2013.

What does it mean to reinvent yourself? What are the main steps of reinvention—and which do you personally find to be either the most challenging or rewarding?

Reinventing yourself is simply embracing change – some that you intend, and some that’s unexpected. I talk about “lower case r” reinvention, in which you make a conscious effort to gain new skills and cultivate new experiences, so you’re ready for change, vs. “Capital R Reinvention,” in which you face a real disruption in your life, such as being laid off when you haven’t updated your skills. The more “lower case r” reinvention you can practice in advance, the more likely your transition will go smoothly. 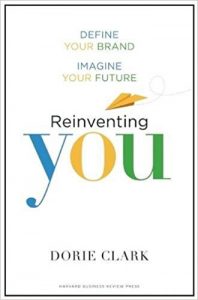 How does one guard against discouragement when a frank self-assessment may reveal more weaknesses than strengths and suggest an uphill path with no guarantee of a positive outcome?

Almost no one is exactly where they want to be in their lives – there’s almost always a gap of some sort between our present state and what we aspire toward, and that’s a good thing, because it keeps us motivated. But it can feel overwhelming if the process seems amorphous or extremely difficult. This is where it’s useful, first of all, to break your professional development down into concrete steps (“read one book about blockchain this month”), so it feels manageable.

As I describe in Reinventing You, a “mentor board of directors” whom you respect can also help ensure you’re seeing things realistically – neither too bullish nor too bearish- and can give you valuable feedback about the best way to develop yourself.

There’s no such thing as reinventing ourselves in a vacuum. If you want your reinvention to stick, you need to convince others that you’re credible in your new field or role. That means you have to rebrand, so that they’ll come to think of you in your new identity, and you’ll have access to relevant opportunities.

What are validators and how can they be identified and developed?

Research has shown that people have limited tolerance when it comes to someone citing their own accomplishments – it just sounds like bragging. But if someone else – a third-party validator – says those same things about you, people will listen up and decide they have to get to know you.

A great way to bring validators into your life is to create a ‘wingman’ relationship where you and a trusted colleague vow to ‘talk each other up’ at conferences or networking events, raising both of your profiles in a win-win fashion.

Jokes are often told about those who Google themselves. Why might this actually be an important tool for those who take their careers and reputations seriously?

It’s very simple: if you don’t have the facts, it’s very hard to make accurate decisions. In this case, the facts are ‘what’s being said about you online’ or ‘what other people see when they look you up on the Internet.’ If you’re unaware of this, it’s risky – there might be inaccurate or negative information shaping their perceptions that you don’t even know about. Knowledge is power, and if you find something amiss, you can take action to correct it and put out more relevant content that will serve to counteract its influence.

Consider a hypothetical well-known company that has had substantial negative press stemming from issues of sexual harassment and discrimination. Would you walk us through the general process of reinvention you might use for a company that wants to change and rebrand accordingly?

The key here is that for a true reinvention to occur, there has to be substance to the rebranding. You can’t overcome a scandal with just a PR campaign. So your starting point has to be firing or disciplining the responsible parties (depending on the circumstances) and putting in place measures to ensure the problem doesn’t happen again. Then, you can publicize that – and it can’t just be a one-time press release. To stick, it has to be a consistent message backed up with actions.

What do you consider one of the most disastrous branding efforts of the last decade? How might you have consulted on the project to facilitate a different outcome?

Uber is such a breakthrough technology and its users love the service – but not the executive shenanigans and, to the extent folks are aware of it, Uber’s relationship to its drivers, many of whom complain of decreasing wages over time. It’s a perfect example of a company that should have a passionate following but instead, its users are often embarrassed that they haven’t yet chosen to #deleteuber. They’ve made stabs in the right direction, bringing in noted talent like Bozoma Saint John and Frances Frei, but both left rather quickly, leading one to wonder what’s going on. Rebranding only ever works if the commitment is real and backed up over time.

If you could go back in time and observe all the conversations behind any key business decision, what would you want to observe and why?

Maybe the AOL/Time Warner merger. It was the height of the tech boom and hopes were so high – and were dashed so quickly. I think we could all probably learn from the heady mistakes and hubristic assumptions that were made.